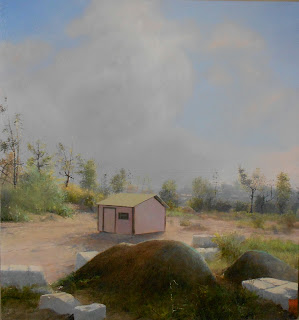 Anecdote of a Hut

In the center of this painting there was a pink shed, or hut, as it was referred to in the title.  However, my eyes did not rest long on this title passage of the painting.

I looked at the sky because it was subtle and gorgeous and occupied slightly more than half the picture plane. I looked at the dark mound of earth because of its strange shape, contrasting tone, and its position in the foreground. The few trees articulated with improbably dark singular brush strokes called my attention to them, especially those creating a net-like pattern on the left edge. Then, a small, red rectangular shape in the lower right corner, repeatedly drew my attention to its incongruity. And I wanted to look into the vague and strangely lit distance because I always seek this point in landscape paintings.

My gaze did not rest on the hut. In fact, it seemed to bump into the hut on its way to other passages of the painting. The hut actually seemed to block passage beyond it. I found myself  wondering about the focal point or focal points.  And I found myself thinking about Wallace Steven’s Anecdote of a Jar.

I placed a jar in Tennessee,
And round it was, upon a hill.
It made the slovenly wilderness
Surround that hill.

The gaze wouldn't linger on the jar with the complex wilderness around. Mine wouldn't rest on the hut.


The sky, the distance and the hut are described without the slightly frantic texture of the rest of the painting. And its strange that a scene so still should also be so agitated, as if the viewer/painter cannot stop focusing on individual blades of grass or branches or leaves against the notion of a singular focus.

One more thing I wanted to think about was the format. This landscape painting was not horizontal (the format most common to the genre), and it was not quite square (Klimt painted square landscapes but I cannot thing of many others); it was vertical by one inch. I had no idea what to make of this but I think that it contributed to the slightly uneasy experience of looking at the painting for an hour. At first I thought I knew what I was looking at but I became less and less sure.

Incidentally, the painting arrived nearly an hour into the two hours it was scheduled to be on view. It was rushed to the gallery, unpacked, hung, lit, and adjusted in front of its audience. It was something to see this small painting become the focal point, making the gallery surround it.