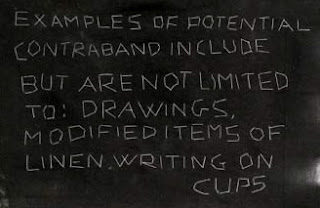 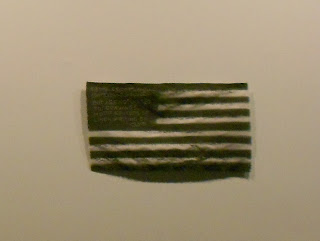 
The piece was comprised of nine black and white hand-painted American flags on which the artist has embroidered passages of the behavior management manual for prisoners at Guantanimo Bay.


The aspect of this work that I wanted most to dwell on was the stitched lettering. The labor of this task was the heart of the artist’s vigil for these prisoners. This gesture must have become tedious to pursue. But she did. We can see that time passed and the artist approached the task in different states of mind; sometimes the stitching is tight and the lettering small, other times the letters are more crudely and loosely rendered.


I have a hard time with overtly political art. Politics is something I want to engage in with reason. The history of political art is rife with propaganda and not always for the good guys. I go to the visual arts for something else. I want ambiguity. I want tenderness. I want a language that disrupts clarity. Some artists, like Francis Alÿs, manage to apply small human gestures to huge political situations. I do not really want to engage the flags (that tired, and loaded symbol) and the fact that the passages are selected from the manual, well, this editing suggested to me—against what I believe to be true––that taken as a whole and taken in context, the manual is not so bad.


For me, the power in this piece is in the small, human gesture of the stitching. This act alone is quiet, unique, sustained. It is human and effective. A woman sewing (or writing, like Akhmatova) for a man (or in this case men) in political prison is an old but always poignant story. I also think of the line from Allan Ginsberg’s Howl, which is repeated several times: “I am with you in Rockland.” I believe the artist is saying this: in all of the humiliations and absurdities and institutionalized discomforts, I am with you.