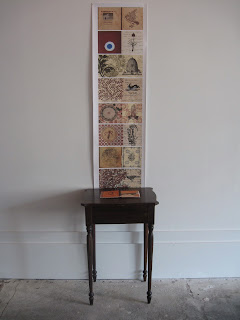 
Each of us has our own, personal geography and we apply it to our own form of mapping, rich with symbols that only we can access. We forget that location is not something universally understood or collectively experienced.


It took me a while to put my finger on what was unsettling about this piece. Geography was a vertically hanging print, and a small book labeled "Maps" on a small wooden table. In the book and on the wall piece were images of the world, illustrations of a circular earth, simplified, and antiquated. But there was a tension between the images and the title of the work. And then I realized what it was. This work did not to refer to the broader world.

The dominant imagery was interior, interior as in indoors and interior as in within a self. Images of objects or flora or designs overlaid ornate patterns that might adorn ancient walls, tapestries, or books. Even the fauna looked stylized and felt local: a beehive, a cage bird, an illustrated rabbit.  This looked like the world proposed by, someone who has elected not to engage in the world as it is. This is a world created inside a room, a room with (or wanting) ornate wallpaper, windows constructed from the pages of an old illustrated dictionary or almanac. This work was about travelling Emily Dickinson-style: in the imagination.

The more I looked at Geography with this idea in mind, the more curious I became about the work and the person (or persona) behind it. For some reason this work compels me to refer to the persona of its creator. When we discuss poems we say the speaker, allowing that the poet might be writing from a viewpoint she does not necessarily or entirely occupy.


There were words positioned next to some of the images. These words also began to read like decoys to me, like trompe l’oeil paintings on the wall, giving the illusion of space. “Circle of Longitude”. At first the phrase suggests a shape that encloses the massive  earth. Then I realize that that shape encloses a diagram of the earth. Circles appear throughout the book and the print as maps of the world and decorative elements. This makes me think of someone meditating on the world from a desk, drawing pictures of or writing the name of some foreign place over and over. But that place is vague. The most vague place there is: the world.

When I first encountered Allyn Stewart’s work she was fixated by, tormented by––I cannot think of an accurate or suitable word here–– the war crimes being committed in the Kosovo war. Her collages fused beautiful imagery (patterns, butterflies) with simplified silhouettes of soldiers and bodies. They were framed by scripted descriptions of the genocide. This ugly world came in through the internet and the New York Times. She would not look away. This latest piece, Geography,  might be the creation of someone (or some persona) who had enough of that world.

One word printed within the book is “omitted.” This word appears near two birds that look like not quite scientific illustrations. On the facing page are two diagrams of the earth. What is omitted I ask myself, looking back and forth between the pages? I mean, nearly everything has been omitted from this beautifully ornate, private paper world. What remains?