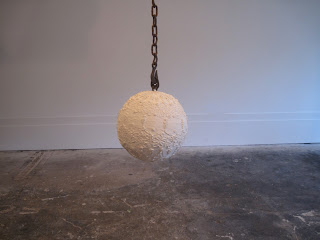 
I did not spend two hours with this work as I have most of the work in the series so far. I came into the gallery out of sorts and unfocused. A small child in my care suffered a chocking episode. My house has suffered the neglect of my distraction for two weeks now. I owe people phone calls and emails. My bank account is wobbling. So my reading of this piece may very well be hampered or encouraged by this condition.

I remember my mother, a mother of seven, using the phrase “I was a wreck”.  Nowadays people often say, “train wreck” instead of simply “wreck” and they mean “a mess.”  I prefer wreck, for its openness, lack of grandiosity and sense of observed spectacle (Nowadays nothing is anything if not observed).

One of the elements of this piece that enjoy thinking about is the title. Wreck. It can be a verb or a noun. It actually does not describe the object (a wrecking ball) but what the object does, or causes, or maybe the person it for who it is a stand-in. So the greatest tension in this piece is between the title and the object.

There is also tension between, the ball and the chain that comprise the piece. The chain is a predictable metal chain, slightly rusted. The ball is white and covered with a cake frosting texture and free-hand filigree, though it appears harder and denser than frosting. The ball did not quite transcend its material (plaster?) to appear soft, cake like. It was enjoyable to think of what the piece would look like if the ball could really be mistaken for cake or was cake. Then again, it was enjoyable to think of it, heavy as it was (you could tell that it had weight by the way it moved slowly and slightly) smashing into the walls, table and wine bottles.

Male-female tension was brought up by some of the viewers. But couldn’t shake my perspective that was inextricably linked to that moment. I saw the wrecking ball as a stand-in for one person, the tension within one person. Weighted and potentially menacing, but unlikely to find the assistance to really do some damage.
Posted by The One Series at 11:02 AM