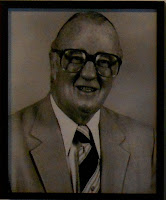 June 9
Yasser Aggour
From the Private Collection of Dr. Sausa

Who is Dr. Sausa? 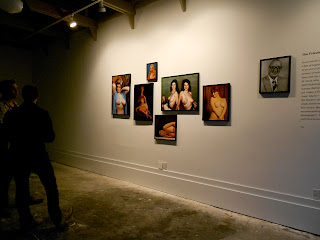 Why wouldn’t we believe the wall text? It was signed with the author’s initials. Why would the author tell us a story that wasn’t true? Ahh…

When I first saw the piece and read the text I laughed out loud at the story of the man with egg-shaped head, ugly little teeth and enormous glasses. I was also touched by it. If we make art, we must relate to his assertion when he declared “I am an artist.” That it came to him after waking from “an especially brutal syphilitic fever” is very, very funny. If we make art, we are laughing not only at him, but at ourselves.

The same sort of goes for the women in the photographs. The women are posed, bear-breasted, and in postures of attempted (albeit rather awkward) seduction. These soft-focus women with out-modish hair and out-modish breasts possessed slightly odd features. One was cross-eyed, one with red hair seemed to have a shadow of dark hair (or possibly just a shadow) over her upper lip. In other words, in spite of the bare breasts and flirty poses these were not sexy pictures. In fact, they rendered the convention of these mildly dirty pictures quite absurd and somewhat sweet. In the moment of the piece both endeavors, art and sexuality, seemed a little misguided and rather touching.

So did Yasser Aggour create Dr. Sausa? I mean there is a photograph here of someone.

In the discussion inspired by this piece I learned about the Storyville photographs of E.J. Bellocq and the role of the artist Lee Feelander. I looked up the history later. Bellocq photographed the models (they were prostitutes). Later, Freelander purchased the negatives, printed them and by doing so, re-contextualized them.

I know from a conversation with the artist that the work was made “semi-site-specifically.”

We look at these photographs and ask, Are these people really characters and not "real" people? The wall test is signed with the artist's initials. Is he also a character?

In Chapter One of Milan Kundera’s Immortality the narrator is sitting by a pool. He is watching a woman in her sixties taking a swimming lesson from a much younger man. When she leaves, she turns to the young man and waves. "The essence of her charm, independent of time, revealed itself…and then the word Agnes entered my mind." Agnes, the novel's protagonist was thus born. Later the narrator is identified as the author, Milan Kundera. In this book and others he, Kundera playing himself, interjects. He appears as the creator, mixing with the fiction. In Chapter Two he asks: "Who is Agnes?"

In 2003, J.M. Coetzee delivered his Nobel Lecture in which he addresses the mysterious relationship between the author, the characters and the reader. If you can, listen to the audio here.

This work read to me like a piece of short fiction. Still, we have photographic proof. Who is Dr. Sausa? Why would an artist tell us a story that wasn’t true?